So my new Doc, Dr. Lee, decided to have me get a full panel of blood work.  I was to be fasting and have all of the blood in my body drained out for testing.  Not really, but this list was LONG!  I was actually really glad though, because I've been wondering about some things and feeling like others weren't properly treated. 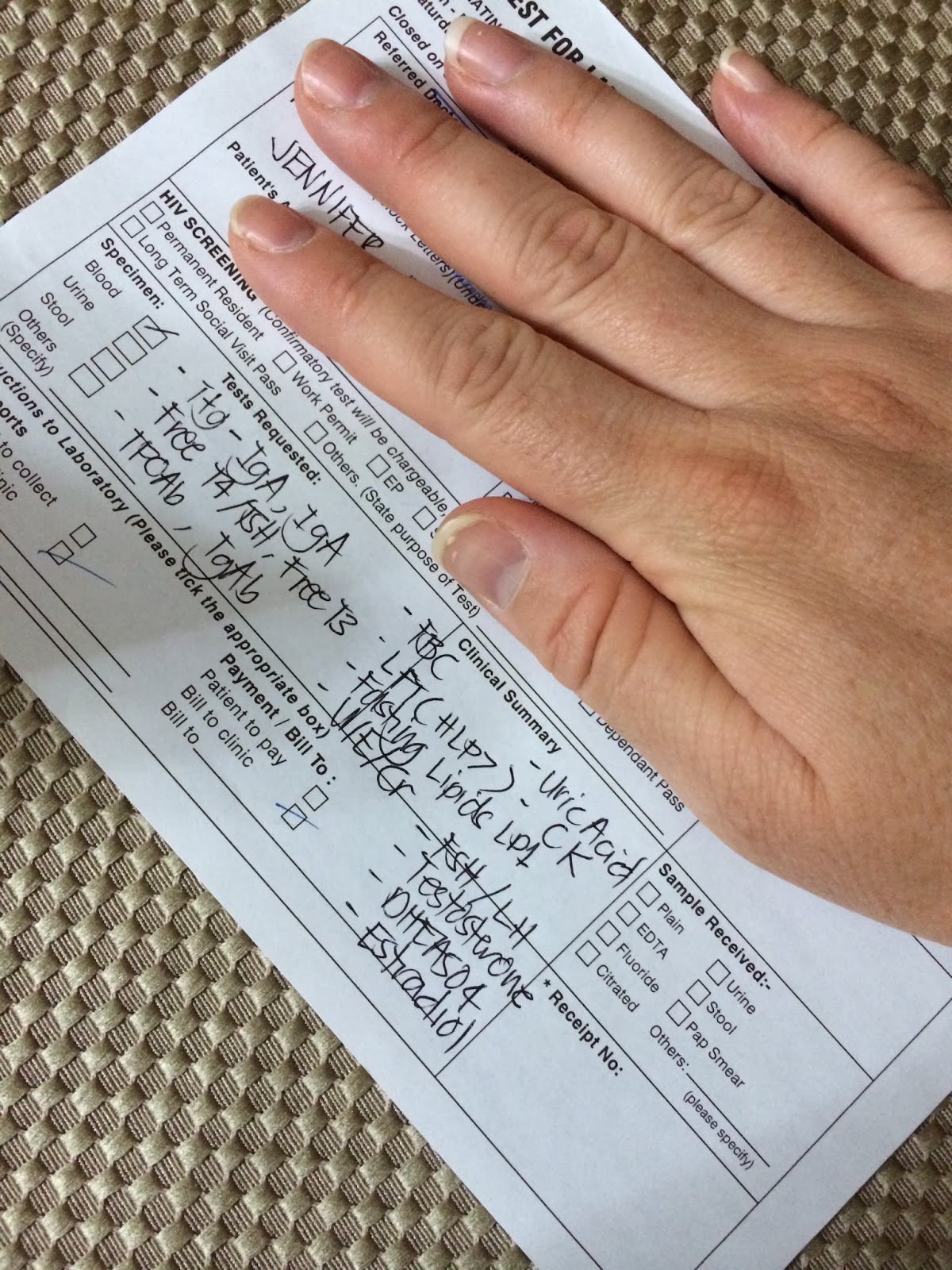 Anywho, I got a taxi after 40 minutes of waiting in the rain and headed down to the medical center for labs.  Little did I know, the results were gonna be scarier than that dang needle.

The same day that I had my labs done, I went to my doctors office to have a CGM inserted for my blind trial.  Again, he wanted a blind trial so that I wouldn't be interacting with the CGM but rather to collect the data and make adjustments to my insulin regimen.

One week later, I went back to the doc to upload the CGM data, review that, and talk about my labs.

The week that I was wearing my CGM, my doc wanted me to be recording all of my blood sugars, meals, and insulin doses.  Introducing the mySugr app.  Very cool, highly recommend it!  It was a great little app on the iOs and I found it was easy to use and maybe even a little entertaining.  I logged everything really well for seven days and haven't used it since. What can I say?  I gave up on logging a LONG time ago!  Plus I log all of my calories on MyFitnessPal so that's just way too much time on logging!

Then we went over my CGM and it was fine.

So, basically, my blood sugars are under control and I don't have PCOS but other than that I'm a complete mess.

This was REALLY HARD news for me to swallow.  Really.  Hard.

I'd seen a doctor about my thyroid and possibly having Celiac previously but I was never actually tested for Celaic.  I played around with gluten free for about a month and then I decided to move across the globe and basically forgot about all of it.

This time though, it's time to face the facts and realize what I already thought I knew.  Celiac. Positive.  And no more wheat for me! That SUCKS!

As for the Cholesterol, I'm just gonna go ahead and say that I had already had a high cholesterol come back and this one wasn't really a surprise.  In the states though, my beloved Dr. Day told me I could wait until I was 35 before starting on any medications.  Not this Doc.  He wants me on a low dose of Statins.  It took me almost a week to take that first pill.  So far no bad side effects so I think I"m good there.  And if it protects my heart, then I'll do what I gotta do.

Hashimotos.  or hypothyroid.  So I've got that.  I have been taking thyroid meds for quite some time and I knew they weren't enough.  I saw some whack job at the beginning of last summer and he wasn't doing it for me so I quit him and ignored it.  Until now.  I'm on double my dose from before and finally able to wake up in the morning!  Hooray for that!

As for the Uric Acid, I got to do the ever so enjoyable 24 hour urine collection.  I never heard back from them so I'm assuming that test was fine.  Geez!  I don't want to find out that my kidneys aren't working well.  Guess I gotta stay vigilant and do everything I know to keep this dreaded diabetes under control.

Switching over to gluten free has been difficult.  I think that's compounded with the fact that I live in a freakin expensive country and it's hard to pay for regular groceries let alone switch it all up and eat a different way.  I had some really good go-tos back in the states when I tried this before.  Some of those things just aren't available here and I've resorted to eating eggs all the time.  Not really, but... really!  I am so bored and need some good gluten free meal ideas.  Particularly lunch.

I guess after a few months of focusing on the big move, and home-schooling my oldest due to some unforeseen circumstances, it is time to focus on me and my health again.  It's hard when you're a mom and have another life outside of taking care of diabetes 24/7.  But it's wake up calls like this that kick your butt into gear.

I didn't reach out to many in the DOC about all this, but it's time I put this story out there.